There are many, many reasons why I love Chevrolet:
Here are a few of my favorite reasons.

About '2' weeks before my 16th birthday, December 30th,
1965, my parents helped me purchase a used 1963 Corvair
pick up truck from Gateway Chevrolet in Daly City, California
for $900. The Corvair 95, like the Volkswagon Van, had the
engine in the rear, which allowed a very unique feature, a
passenger side ramp. This feature became very handy for
me to do rubbish hauling and light moving jobs.

It was white with a red stripe, just like the ones to the right.>

Unfortunately I lost the truck to a middle of the night fire
after having the truck for a little less than '2' years. I had
just ordered a brand new 1968 Chevrolet 3/4 ton pick up
truck. The new truck had the full size, eight foot bed, with
a '396' engine, bucket seats, air conditioning, automatic
transmission, gauges and more. Believe it or not, this cool
black truck was about $3,600 out the door.

In 1967 I took a ride over the Golden Gate Bridge to the
City of San Rafael to see a car that was for sale. It was a
1966 Midnight Blue Chevelle Super Sport with the '396'
engine. In 1966 the Chevelle '396' standard came with
'325' horsepower, with an option of '350' horsepower
and a special option of '375' horsepower. This car had  the
special '375' horsepower and a '4' speed transmission with
the little white ball with the chrome lever to put it in reverse.
This car was also special because it did not have the standard
bucket seats. Instead, it had front bench seat with its black
interior. There is nothing better than your babe next to you.

Why I love Chevrolet 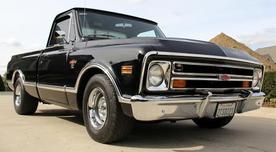